[S2]Maliken HoN is currently unavailable. We are aware of and working on the issue. When we have more information, we will update this thread.
More details to come (and hopefully a FIX!!!!!!!).

We are resolving a number of issues related to network outages at one of our major NoCs. We have WWW back online and limited DB connectivity. Progress is being made… I’ll update this thread as more information passes my way.

Our current situation is not caused by an intentional attack. One of our two main NoCs had significant internal issues. These issues eventually resulted in the corruption of a few very large tables in our database (as well as no accessibility to a crucial SAN drive system).

We are repairing those tables, however, it may a while due to the size of the table and potential damage. I can’t give an ETA as there is too much uncertainty.
Just know this, we are working as quickly as possible to restore service. Outside of the potential material impact to S2’s business we ALL want to get a few games in ASAP!! 😀

u may read more there: forums.heroesofnewerth.com

[S2]Maliken: HoN is semi-operational again. We are not out of the water just yet. However, we are making progress.

On a more positive note, we have confirmed the identity of the individual responsible for the criminal acts causing HoN’s downtime. Even better news is the UK government takes these matters VERY seriously http://www.met.police.uk/pceu/ 10 years in prison for a “flag in a video game” seems pretty silly to me!

We are working with authorities there and expect to have justice soon!

[S2]Toolz: We had the service running for about 3 hours and came under another attack. Our mitigation specialists are working on fixing the current attack and we should have an update for you shortly.

The systems that we were attempting to use to block the attacks were not sufficient enough and we are going to be implementing a new system over the next several hours. I would expect this would take a MINIMUM of 6 hours before you see anything and I will update you again with the status of that.

Security Warning:
There’s a very good chance it’s some of our own players unknowingly attacking us, as we saw with the last DDOS as soon as we started banning large chunks of ip’s that were attacking us we saw numerous threads start to crop up complaining of being unable to connect to the services. If you’ve installed any purported “map-hacks” “camera distance hacks” or anything else claiming these types of things and you’re no longer able to connect to the network, it’s very possible YOU yourself are attacking the network, please scan your pc for trojans, viruses, etc.

The most stupid reason to DDoS a Server:

so it actually happend: Forum and Gameserver are under DDoS Attacks

If ur not a HoN Player: In HoN is a ingame Item Shop where u can buy Symbols in form of Flags (and more Stuff oc), this Symbols appear next to your Nick in the Chatlist. There are a lot of Flags, but not of all Countries (like India) – thats the wohle Problem (if it is not Fake :p) 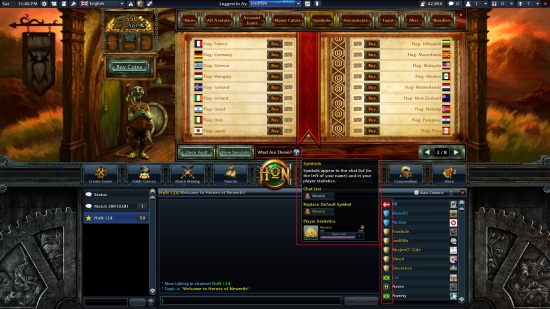